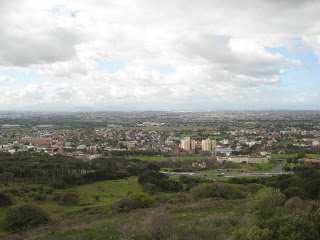 A view of the city I finally made it to! Cape Town is worth waiting for!

Any great adventure can’t begin without a few speed bumps, and my South African excursion is no exception to this rule. Looking back on the long two days of airports, baggage claim, layovers, and turbulence, I (now) can’t help but laugh because my misfortune is so fitting- this would only happen to me.

My travels began early, as I left my house at 5:45am on the morning of July 12th and I spent over 33 hours total in transit to my final destination- my apartment in Mowbray. I had a solid flight to Washington DC with no major issues. Once I arrived in DC, there was already a group of interstudy and CIEE (another study abroad organization) kids all headed to Cape Town to study abroad. We soon became acquainted and stuck together for the torturous 18 hour flight to Johannesburg.

While I came prepared for a long flight, I really couldn’t imagine how long this stretch of the flight really would feel. Conveniently, the in-flight movies were broken for the first 8 hours of the plane ride, so I tried (mostly unsuccessfully) to sleep. Half way to Johannesburg, we landed in Dakar, Senegal to refuel around. We weren’t allowed to leave the plane, but the plane filled up to maximum capacity as others came on, one of which was a man assigned to sit next to me.

When he sat down, the man was super friendly and talked to me quite a bit… and by quite a bit I mean two hours straight. Each time I would try to fall asleep he would poke me and say, “Wake up! You can’t sleep now! Who will I talk to?” While it was refreshing to experience the friendly African culture for the first time, I also struggled throughout this conversation. My extreme exhaustion was getting to me and I could only understand about 80 percent of what this man was telling me due to his strong accent. Before I left, I hadn’t considered language barrier to be a relevant problem to expect since South Africa is an English speaking country. However, I’m discovering that the thick accents are posing a threat and I find myself annoyingly asking “what?!” constantly. As a native, the frustration of my friend on the airplane was quite apparent, as he continued to give me strange looks and shake his head when I answered “yes” to what was not a yes or no question. I figured that “yes” was an appropriate remark for any topic he was discussing which I could not understand. Lesson number one: yes won’t always cut it.

After about 18 extremely long hours on the plane, we landed in Joburg and had an hour to quickly grab our luggage, go through customs, re check our luggage and board our final flight to Cape Town. My bags were the last one to come through to baggage claim, and due to the time crunch, all of the other interstudy kids left and continued on to the flight. I was left with 5 other CIEE kids when my bags finally came. Right when we walked upstairs to recheck our bags, a woman closed the line and sent us up two more levels to recheck them at a different place. Again, my luck kicked in and the escalator broke right as we stepped on to go up, so the six of us looked like a mess trying to carry our two nearly 50 pound bags up the stairs.

Once we arrived at the top, we found a very long line ahead of us to recheck our bags with only about 15 minutes before our plane was set to depart. Luckily, a South African Airlines employee came over and asked us about our flight and assisted us in rushing to the front of the line so that we could be put on the next flight, which left 20 minutes after our original flight.

We made it just in time to our new flight and had a calm ride to Cape Town. I was quite proud of myself for not stressing about being the ONLY interstudy student not on the final group flight, though I did prepare myself for the likely possibility that the shuttle left with everyone except me. My visions of waiting hours for the interstudy bus to come back for me after dropping everyone else off (luckily) did not come true, as I was VERY relieved though to walk into baggage claim and find a large group of interstudy students still standing there.

After waiting for many bags that did not arrive on the right plane, we gathered all of our belongings and finally headed home. I’ve never been so happy to see a bed.

In hindsight, the stressful nature of my travels makes me feel all the more excited-and grateful- to finally be in this beautiful city. It’s incredible how much I’ve learned about traveling and being independent already. While challenges can be frustrating, whether it be missing a flight or trying to understand someone, the sense of fulfillment for overcoming these blocks on my own is so very, very rewarding. I truly appreciate being here and look forward to the unpredictable experiences that lie ahead. One thing is for sure- my mom was right- everything really does work out in the end, and I’m learning to embrace the growth process that accompanies the good and bad times throughout the process.