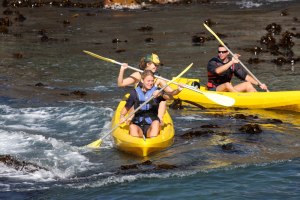 I’ve been in Cape Town for over a month now and finally feel settled into the country. The hectic first few weeks in Africa have transformed into a comfortable routine and a confidence of the ins-and-outs of the University of Cape Town.
After the first few weeks of school, however, I was ready to break my routine and go on adventures outside of the city. Thankfully, around this same time, interstudy planned a trip to Hermanus, a small coastal town on the Western Cape.
Hermanus was a beautiful getaway from the city life of Cape Town. The small town featured beautiful ocean views, small boutiques and delicious restaurants. What drew me to the town was the amazing whale watching along the coastline.
Growing up, I always had a fascination with dolphins and whales. Even though my home on the South Carolina coast had both sea creatures, they were still a rare occurrence to see, which made it extra special when I spotted one.
When I visited Hermanus, my love for whales flooded back to me. In Hermanus, my worries of schoolwork and my slight homesickness for the States disappeared. It was impossible for me to be stressed or unhappy in such a beautiful environment, especially when the prospects for spotting a whale were extremely high.
The first event for the weekend was sea kayaking. At first, the thought of sea kayaking terrified me. I was worried that I would be terrible at kayaking, and that I would slow the whole group down. The possibility of capsizing into the freezing waters also did not terribly excite me.
As it turned out, I was not that great at kayaking. Within the first five minutes, my partner and I had kayaked into a stone wall. In the end, we finished the excursion in style when we managed to capsize five feet from the shore.
Despite these hilarious shortcomings, I definitely think my dabbling into kayaking was a success. I’m not the most outdoorsy girl, so this excursion made me step out of my comfort zone, and I managed to have a blast in the process.
Although we never did see any whales while kayaking, I was nevertheless content with merely splashing my friends and watching a seal swim by.
The weekend in Hermanus ended with eating gelato on the boardwalk and watching four Southern Right whales breaching along the coastline. This was an amazing close to the relaxing weekend.
Hermanus reminded me why I chose to go to Africa – to try out new experiences and grow as a person. While I learned kayaking was definitely not my forte, I had a great time doing it and plan to try it out again, with hopefully better results!