I think I’m in love. No- not with a person, but something much greater….. a place called Galway. It’s in the west by the ocean (which being the Atlantic, makes me feel right at home) Compared to Maynooth and the Greater Dublin Area, Galway is more Ireland than ever. It’s a traditional coastal fishing village meet lively youthful city of fun- best combination if you ask me.

For 70 euro, my roommate Breonie, international friends Andra, Maria, Jaime, and Alberto, Interstudy member Christine, myself, and 94 other international students from my university hopped aboard the international society sponsored buses towards our hostel in Galway. The drive took about two hours, but with the help of my drowsy motion-sickness drugs, seemed about no more than 30 minutes. And in those 30 minutes that I was awake, I saw the fenced hills and livestock of Ireland along the road. This is the Ireland I was anticipating when I boarded the plane and this is the Ireland I have now come to admire. Our hostel was better than expected- Maria, Andra, Breonie, and I shared a room with several twin beds and a bathroom, all of which were in mint condition, at least for a hostel that costs 25 euro. At the reception desk, the “rugged” receptionist we later came to know very well as Paul, handed us vouchers for free drinks at a restaurant called Busker Browns and of course that’s where we went. Dinner (Guinness beef stew) and conversation with the girls was a great way to relax and catch up before heading out for the weekend of fun. Soon after, Breonie and I met up with Claire, who I had met the weekend prior through our Interstudy excursion, and her adorable friend Ginna. Because they both attend NUIG, they knew the area very well and led us on fantastic pub crawl which ended up at the Roision Dubh. There, we listened to several songs of a live band and then danced the night away together. With a couple drinks in us, the night was carefree and even if we were the only 4 people on the dance floor, it didn’t matter because we had a blast. 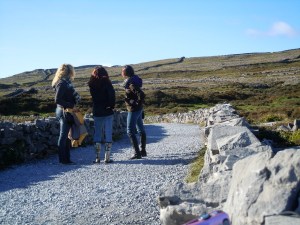 The next morning we jumped aboard yet another bus that brought us to a ferry for Inis Mohr, in the Aran Islands. Let me tell you- the islanders there are so pushy about getting you to go on their bus tour… picture 10 different men standing outside little vans continuously asking you to come see where they want to take you and so forth. Nonetheless, we did end up going along on one of those rides, as we were all recovering from a week of being sick and could not in anyway bicycle the area (especially considering my fitness level or lack thereof). That’s where our bus-driver Martin came in. He has spent his entire life on the Ireland, first as a fisherman, and now as a tour-guide. The entire island relies on the tourist industry alone… and besides the basics, there are no other other jobs. He also informed us that only the islanders themselves had building rights so basically… if you want to live there, you have to marry someone there. Luckily, after questioning Martin about any sons or nephews he had, he told me he could work something out… ha 😛 Then he dropped us off at Dun Aenghus, an old fort. It took us about a half hour to get to the top, 15 of which were put towards taking pictures of each other with each shot of scenery.

When we did get to the top, however, it was absolutely worth it. I am not lying when I tell you I had never seen anything so beautiful. There were large cliffs that dropped into the breaking ocean and you could see water for miles…. or kilometers. Then, when we turned our backs to the water, we laid eyes on the fort. It’s walls were laid out to form a circular structure and you could walk through the doorway to enter a basic colloquium-shaped layout with one part of the continuous wall purposely missing to view the ocean. I cannot lie… the tears did start to build in my eyes and Breonie and I kept staring at each other speechless at the wonder of it all. It took us some time to take it all in, but we did leave, reluctantly, to have a quick bite to eat and meet up with Martin for the next destination of our journey. Because we liked Dun Aenghus so much, he decided rather than take us to what he called 7 dumb church-shaped buildings made of rock, he would take us to another fort on the opposite side of the island. He drove us along the coast and to where the seals come to shore (we did get to see a distant one in the water!) and then dropped us off on a gravel road and told us to walk 30 minutes that way without turning left or right. You have to imagine Breonie and I… walking along… freaking out as if we were in the Hills Have Eyes. But in all seriousness, at any moment, “islanders” (comparable to the status “hicks” in the States) could have popped up from the hills and shot at us and no-one would have heard a darn thing. Because all we could see were stone walls, hills, greenery, and the gravel road that lay beneath our feet, we were also a bit nervous about getting completely lost and stranded in the middle of nowhere. Once again though, we did make it to the coast and holy moly. I don’t even have a word to describe… for once, I can use the word indescribable and that doesn’t even cover it. I thought I had seen it all the hours before, but wow. Wow. Even my camera fell in love with the view- proof is in the pictures I’ve posted. How amazing would it be to get married there… that’s what I’m thinking as I remember how beautiful it was.

After spending quite a while grabbing snapshots at every angle of the cliffs alone, Breonie and I hiked it over to the fort, which again was magnificent. Then the group of us raced back to where Martin had dropped us off and prepared to return to the port. There, we spent a while in the Aran sweater shop where I got myself an authentic Irish sheep sweater. Prior to my trip, I always considered them grandma-like, but surprisingly they are actually pretty “in” here and I just had to get one just to say I had one. I also grabbed a few scarves and postcards and other gifts here and there to take back home. Like every trip, I fell asleep on the way back to the hostel where I just about collapsed from exhaustion the bed for a while. For an Irish-style dinner, we went to Finnegan’s and then grabbed some drink from the off-license to entertain ourselves back at the hostel with. There, we played a few drinking games with some of the German students and headed off to a pub with half of the international population from NUIM. Once again, we had fun dancing and singing and just hanging out, but as I get happy pretty quickly, I also get tired very quickly and had to head home early to get some rest. Apparently, I missed out on a pretty good time because the stories from that night were pretty outrageous and include Breonie, Andra, and the Germans jokingly attempting to steal a boat…. very interesting indeed. Sunday, we awoke to a much more Irish day aka cold rainy windy weather. Clearly, we chose our days very well because the day before had been absolutely gorgeous. We wandered around the city, walked to the pier, and met some other American girls that went to Cork and actually knew the kid Alex I met at the airport in Boston. Then Ginna met up with us and the four of us grabbed a quick bite at the King’s Head before shopping on Shop St. (basically the one street in Galway). I held off on purchasing anything big and waited for Penneys. Penneys is the least expensive store everrrr and they have clothes and home stuff galore. I bought slippers for 3 euro, pillows and blankets for our living area at a total of 10 euro, and a handful of other things which all added up to just 20 euro. I think I will very much miss Penneys when I return to America

At around four o-clock, I suddenly fell very weak, most likely tired from all the travel. We returned to the hostel to sit back and relax with the other swarms of international students and then finally left to return home a couple hours later.

To be honest, I’ll say here what I’ve said everywhere else: That was the best weekend I have ever had in my entire life. From literally breath-taking & awe-inspiring views to an easy going yet awesomely fun nightlife with a great group of girls, I cannot say I have ever had a greater time. I could indeed see myself living in Galway years from now. Guess I’ll have to find me that Irish gent I’ve been searching for my entire life, huh? Ha. It’s now that I leave you with a verse and chorus of that oh- so famous song, Galway girl:

“I took a stroll down the old long walk
On the day I-ay-I-ay
I met a little girl and we stopped to talk
On a grande soft day I-ay
And I ask you friend, what’s a fella to do?
‘Cause her hair was black and her eyes were blue
And I knew right then, I’d be takin a whirl
Down the Salthill Prom with a Galway Girl”

…and now you’ll realize why I think there’s no place better on earth and why I was born to be a Galway girl!