This is “grandma’s brother” at a cultural excursion to a village that teaches people about traditions of villages in Botswana.

Dumela! I have already been in Botswana for almost two months now and I am so excited for the next few months to come. Although I feel like I will never be able to fully understand everything about the culture and Motswana people, I have learned such a great deal so far. The first most basic and obvious cultural difference is the food. I was hoping to come and and have the best food of my life and want to bring back different spices so I could make the food at home.. that is not happening at all. Most of the food here I do not like, especially at the refractory (Mogul) which is where I have my meal plan. They serve the same thing every day for lunch and dinner. Usually it is something like: pap (a traditional porridge like stable made from maize) or rice, then you choose chicken or beef (prepared the same way every day) and then carrots or a beat salad. Sometimes they have a couple different things, like some people eat fish from the special diet section but I dont like fish, or sometimes they have dumplings instead of pap which is a boiled bread, that I love. The other international students and I love going out to eat when we can afford to, there are so many placed to eat that serve delicious food from all different cultures, including a lot of American food.

The second cultural difference is the people and their relationships. When we first arrived at orientation they told us that here girls and guys are not best friends and that if a guy is talking to you it is because he wants a relationship that is more than friendship. But that is far from the truth. I have many local male friends that are nothing but kind to me, and even look out for us international students. And many of them have other local female friends that honestly are just friends. The relationships here are different though than back home. I am yet to see anyone here kiss (besides a married couple in their own home). There is very little public displays of affection at all. Also it is common for people not to talk much about their relationships. This also has to do with the PDA, but a lot of people don’t know who is in a relationship and who is not. Even though some aspects of the relationships are different, I have many friendships with both girls and guys that I would consider very similar to friendships I have back home. 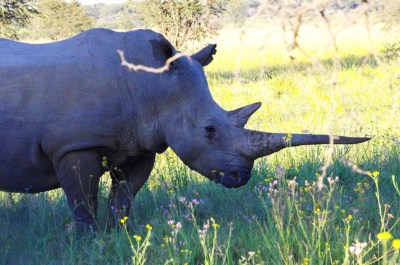 Rhino at the Khama Rhino Sanctuary in Serowe (about 4 hours northeast of Gaborone). I went on three game drives got very close to some beautiful animals!

Many of the students are also very different when it comes to school. I have met many people who work hard, study often, and choose the book over going out.. but here I would say that is not so common. It may have to do with the fact that Botswana students do not pay for their own education. The government gives them money for school and even gives them an allowance for books, and a monthly allowance to be used on whatever they want. Students, depending on their major, are supposed to pay back some or most of the money once they have got a job (similar to our student loans) but it in not strictly enforced. I believe this may have an impact on the effort put into their education. I have been working on two different group projects that include research, meetings, presentations, etc. In one group, we ended up not putting two of our group members names on the final product because they literally did nothing, and for a couple of the other members getting them to do their work was like pulling teeth. For my second group, I was elected group leader on the first day, and even with me telling people exactly what to read, when to show up where, and what to do, they still seem to either not do their work, or simply just don’t show up to the meetings. Maybe because students are not paying for their own education and they know they can just keep retaking classes if needed, they do not care as much about their education and their grades. The professors are even different here, often not showing up for class, canceling class in advance, and delivering very unorganized, unprepared, and boring lectures. With that being said, I do have one Professor that is always prepared, always uses every minutes of every class, and delivers very knowledgeable and organized lectures.

I feel as though I have been pointing out many of the negative differences, but really I have enjoyed every minute of being here and I am loving the positive cultural differences. One of the things I have learned to love is the concept of time. In the U.S. If you make plans to meet at 6:00 to go to dinner, if people are not there at 6:00 you are calling them and maybe even going without them. Here, if a local tells me to meet them at 6:00 to go out to dinner, if I really go at 6:00 I am going to be waiting for awhile. Usually anytime from when they said to 30-45 minutes later would still be considered on time. This creates such a laid back lifestyle that I enjoy even though it took some getting used to. Here among the international students sometimes we say meet at 6:00 real time, not African time.. which means we are actually meeting right at 6:00.. although usually that still doesn’t happen.

In my opinion and when talking with other international students, we believe that the only negatives of being here involve the actual classes. The country, the city, the people, and the experiences outside of class have all been amazing. I am looking forward to my semester break trip in Mozambique, and then beginning to volunteer at an underprivileged school in Gaborone when I get back. I have been working with the school since I got here trying to volunteer but it is a more complicated process than expected. This school is located in what the locals call the “ghetto” of Gaborone with most of the neighborhood being made up of one roomed houses and slums. My friend and I were walking around outside of the school houses when several children ran out the door and jumped out of the window and ran toward us. The first boy literally jumped onto me as others came and stroked my arms and touched my hair, and pulled at my wrists. They kept asking questions like “Where are you staying? Are you staying at a motel? Why are you here?”. We eventually got the students back into the classroom where there was no teacher at the time, and promised them we would come visit them again soon. When we told our regular cab driver what had happened on the way back to the university he explained that many of them had probably never seen a white person before or at least not very often.

Zebra at the Khama Rhino Sanctuary in Serowe