We don’t know about you, but here at Interstudy, we LOVE The Amazing Race! There isn’t anything better than a show about travel, culture, and competition! For those of you who have been living under a rock and don’t know about this “amazing” show, The Amazing Race is a reality game show where eleven teams of two race around the world against each other in hopes of winning one million dollars. The race is split into twelve legs. Two of the twelve legs take place at Interstudy program locations: Scotland and Northern Ireland.

END_OF_DOCUMENT_TOKEN_TO_BE_REPLACED 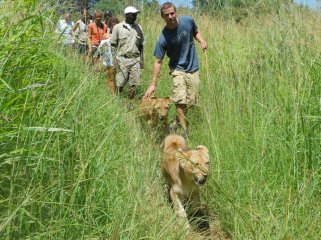 Forgot or ran out of time to submit your Fall 2013 Interstudy study abroad application? Don’t panic! Many of the application deadlines have been extended! END_OF_DOCUMENT_TOKEN_TO_BE_REPLACED

Even if you’re not reliving your favorite “my heart will go on” moments at the Titanic 3D movie this season, you’ll be interested to hear about a new museum, Titanic Belfast, recently opened in Belfast, Northern Ireland. The museum, which opened on March 31st and is the exact height of the ship, takes visitors through the story of Belfast in the 1900’s and the citiy’s contribution to the most iconic cruise liner in history. It was in Belfast that the ship was built before it’s fateful cruise in 1912. END_OF_DOCUMENT_TOKEN_TO_BE_REPLACED

So here I am. It’s a full six months after my first post and settling in to write my last blog entry. A day doesn’t go by when I don’t think about my time in Belfast. It’s funny because I can distinctly remember dropping off a friend at her car the night before I left for Belfast and the sinking feeling I had as I drove away. I was absolutely petrified of leaving my friends and family behind and going to a country where I knew no one.

However, that feeling didn’t even compare to what I felt as I rode in the cab to the Belfast airport. While I love the city of Belfast, the manageability of its size and the multitude of pubs and bars, that’s not what I was sad to leave. The friends I made, from all over the world, are what I cherish most about my experience abroad. That is something that I wish someone would have told me before I left and just maybe I would’ve saved my energy getting upset over leaving the friends I would see again in six short months. END_OF_DOCUMENT_TOKEN_TO_BE_REPLACED

Another Place, Another End but I’ll Hold On…

So a question I’ve been hearing a lot is “Are you ready to go home?” The answer unfortunately isn’t that easy to give. On so many levels I’m not done with this place—the people, the traveling, the experience. But it has made me realize some important things about the US.

I will always be tied to the US because that’s where not only my family is, but also where I was shaped into the person I am today. Not saying that living here in Belfast hasn’t also shaped me, but my foundation, as a person, was built in the US. So as much as I love this city and this country, it will probably never bear the same sort of attachments as the US. END_OF_DOCUMENT_TOKEN_TO_BE_REPLACED

Alumni Spotlight: Climbing Out of Your Comfort Zone

For months you plan ahead for your semester abroad – what courses to take, what to pack, where to travel. After a successful (though possibly emotional) departure from the US, you arrive at your destination. The first days are a whirlwind of excitement and new experiences but somewhere around week two, it might hit you…what now? Getting involved in campus activities is one of the best ways to fill that time between class and homework while abroad and meet new people at the same time.

Here’s how one Interstudy Alum, Andrea Fasen, from Colorado State University, got involved on the Queen’s University, Belfast campus during her Fall 2010 semester abroad. Andrea’s involvement in the Mountaineering Club shaped her time abroad and shows the importance of “climbing” out of your comfort zone in more ways then one! END_OF_DOCUMENT_TOKEN_TO_BE_REPLACED

This Saturday, I had the opportunity to experience some of the attractions that really define Belfast and Northern Ireland for me. First, Queens led an excursion to the highest peak in Northern Ireland, Slieve Donard, and I was completely blown away by views. After seeing Giant’s Causeway and the Antrim Coast, I didn’t think this country could get anymore beautiful but even on a cloudy day, this hike served to epitomize the natural beauty of Northern Ireland. END_OF_DOCUMENT_TOKEN_TO_BE_REPLACED

Learning While Living in Belfast 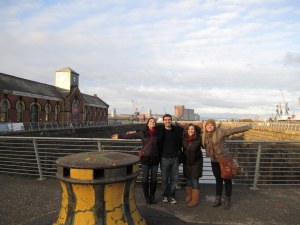 So I’ve been here in Belfast for about a month now and so far it’s been one of the greatest experiences of my life. I have found certain aspects of it challenging, simply because there are a few major differences between here and the U.S. First and foremost, for two English-speaking countries, you wouldn’t think that language would be one of these said differences, but that has not been my experience here at all. I have had entire conversations with my classmates, or flatmates, or just people I’ve met around town, without knowing what exactly what was said. In the beginning, it was the most disconcerting part of being here because I would have no idea what was going on around me; when people would speak to me, I would simply smile and nod like I knew what they had just said to me without really having a clue. It’s getting easier, though. My older brother, who also studied in Europe, gave me a good piece of advice, “Listen to what people are saying, not their accent.” END_OF_DOCUMENT_TOKEN_TO_BE_REPLACED